I have made bread only once before. That was me blindly following a recipe. But following a recipe doesn't mean you know how to bake. It takes a few attempts to learn techniques and develop an intuition. After watching the first season of The Great British Baking Show, I was ready. It made sense to start at the beginning. So despite complaints about “zero nutritional value,” I went for white bread and started with a 5 lbs bag of bread flour.

Take ⅔ cup lukewarm water and add 1 tsp of instant yeast. Add 1 tsp of sugar and mix. Let sit for 10 min until a fine froth forms on the surface. Take 2½ cups of bread flour in a large bowl. Add 1 tsp of salt and 1 tsp of sugar. Add ¼ cup lukewarm milk and 1 tbsp of room temperature butter and mix. Slowly add the yeast mixture while stirring in flour. Form a moist mixture and knead with your hands until springy to the touch. Place dough ball back in the bowl and cover bowl with a plastic sheet. Let the dough sit in a warm place to “proof” for an hour until the dough is almost doubled in size. Now punch air out of the dough, and shape it into a rectangle that is the same approximate length and width as your loaf pan. Place dough into greased loaf pan. Cover loaf pan with a wet cloth and let sit for another hour until dough rises 1″ above the loaf pan. Preheat oven to 375°F and bake for 20 min. Spray water occasionally into the oven to keep it moist. After 20 min, remove loaf from the pan and let cool completely before cutting into it. 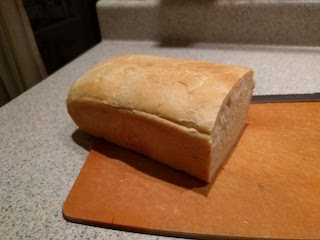 Overall, it was a successful first attempt. It tasted good, and disappeared quite quickly. The crust was crispy and the inside was soft and airy.

As you can see in the picture, the shape of the loaf did not turn out perfectly even. It is a little taller in the middle than the sides. This happened because when I placed the dough into the loaf pan, the dough was lumpier in the middle. It was not evenly distributed. I will have to do better next time!

But I had an accident and added too much water. The dough was too sticky. I had to add a lot of bread flour to correct. Didn't end up with a lot of whole wheat flour in the bread after all! 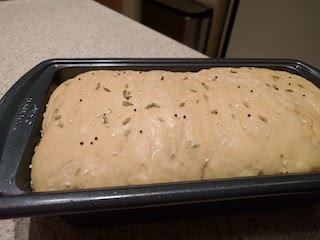 In the end , the bread turned out alright. It was even. It rose well. The fennel was a big hit. My only problem with this bread had to do with it its smell. It smelled yeasty and I could also taste a little egg. I'll have to work on that next.

How do you get rid of the yeasty smell? I read discussions on the Internet that suggested that I should (a) use less yeast, (b) let the first proof happen slowly overnight instead of a quick proof at a higher temperature, (c) save some of the bread dough and use that as starter instead of using yeast. I went with (a) and (b), and also skipped the egg and milk entirely.

I was careful not to add too much water like I did last time. But I ended up being too careful. I added too little water, which made the dough very dense and not moist feeling at all. I believe they call this a gnarly dough in the trade. Being anxious about this, I forgot to add any kind of seeds into the dough.

The next morning, I found the dough had not risen much. I decided to shape it by hand into the loaf pan, and not roll it for fear of losing even the little bit of air I had. The second rise was hardly noticeable. It only got about half way up my pan.

I have no picture this time, but my bread ended up being short and dense. The sides stuck to the pan. Was it edible? Yes. But you could eat two slices and declare that you are full! On the bright side, it didn't smell of yeast!

This time I was determined to use a higher proportion of whole wheat flour and get a good rise. Maybe having a more moist dough would do the trick? This experiment was going to be all about having a soft supple dough. My plan was to follow Chef John's advice: don't add all the flour at once. It is much easier to add flour to a sticky dough, than it is to add water to a gnarly dough.

I started with 1½ cups of whole wheat flour and only ½ cup of bread flour. I held another ½ cup of bread flour in reserve to be added as I mixed the dough. As an extra touch, I added some caraway seeds and dried rosemary that I bought recently. I skipped the butter. I skipped the milk, but made the mistake of not adding an equal quantity of water in its place. This meant that I did not have to use most of my extra ½ cup of bread flour. But never mind. I ended up with a soft and supple dough instead of a gnarly one… which I most definitely would have ended up with had I added all the flour at once.

After proofing overnight, I got a decent amount of rise. But my second proof in the loaf pan was a bit disappointing. The dough still did not go beyond half the height of the loaf pan. This time it was more airy, but I was working with less dough. I baked at a higher temperature of 400°F for 20 min. I also placed a ramekin full of water in the oven to keep the moisture level up. 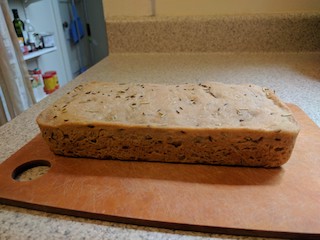 I ended up with an airy and nice tasting, albeit flat loaf. Good separation from the pan on account of properly buttering the pan this time. (Or was it the ramekin with water?) The bread was still a bit dense. But the caraway seeds were simply amazing. I could not taste much of the rosemary, although it added a good smell. No yeast smell again, so I am keeping that technique.

The challenge for next time is how to get the loaf to rise while still keeping the bread healthy.

Work related travel to Chicago took weeks away from baking. But now it was time to get back. In an effort to learn new techniques, I started reading the book Matthew got me months ago — Bien Cuit by Zachary Golper, who runs a bakery at Brooklyn. The idea seems to be to develop a thick, crispy and dark crust.

There is a lot less kneading involved, but a much more prolonged fermentation process. First, ½ cup of flour and a ¼ tsp of yeast are mixed with ⅓ cup of room temperature water. This starter is left to ferment for 8 to 11 hours in order to get a head start on fermentation. This starter is then added to the rest of the flour and water mixture. After a little action, the dough is let to sit for an hour. Following this, it is rolled and tucked three times at 1 hour intervals. Then the dough is transferred to a baking loaf for the final proof — which is done in a refrigerator overnight. Bake in the oven extra long at a high temerature along with a ramekin filled with ice. 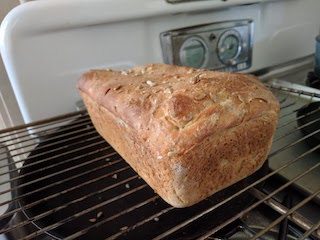 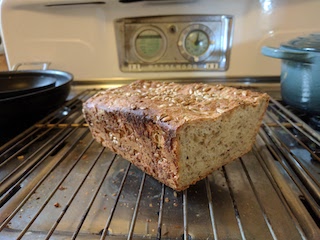 It takes a certain amount of courage to let your loaf sit in the oven longer. As you can see, the first effort still ended with a light crust although it was a winner when it came to flavor. In the second attempt, the crust was darker with some even darker spots here and there (desirable). Although the crust had a mildly burnt flavor, this was actually good!

We were going over to our neighbor's to watch the NBA final, and I decided to take the leap and let my bread loose on neighbors. Appearance is important. I could not have it look like a loaf baked in a loaf pan. So I decided to go free form. Keeping the recipe the same, I used a large bowl with a floured kitchen towel as the mold for the final proof, instead of my trusty loaf pan. Unfortunately, I had only 4 hours available for my second proof. This is because we went wine tasting yesterday, and I forgot all about preparing my dough once I returned. Anyway, it turned out great. And everyone loved it. It was pretty delicious as part of a sandwich. 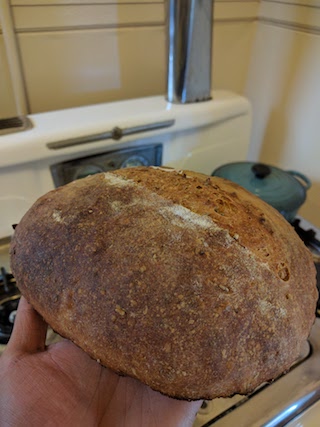 Oh, and I even managed to get my first successful scoring on bread. That takes more confidence than you would imagine.

Taking an extra long break from baking is not the best idea. I tried baking a loaf after a 2½ month long break, and it was the same as me having never baked before. Add to it the fact that I used a fresh batch of flour, and I ended up with the driest loaf I have baked thus far. It had reasonably good flavor, but got almost no rise. 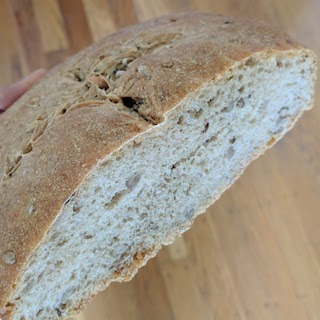 I should try getting a new batch of instant yeast. I don't know why, but my yeast never froths the way they show on TV.